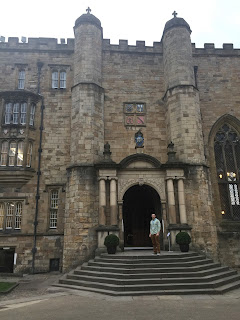 The third week of April of 2018, I had the honor to participate in the 6th 'Palaeo-Arctic Spatial and Temporal Gateways' (PAST Gateways) Conference hosted by Durham University (one the oldest educational institution in Europe). The event focused on the theme of Arctic palaeo-environmental change beyond instrumental records, and particularly on: Growth and decay of Arctic Ice Sheets, Arctic sea-ice and ocean changes, Non-glaciated Arctic environments including permafrost, and Holocene Arctic paleo-environmental change. The conference icebreaker took place in the magnificent Great Hall of Durham Castle (UNESCO Heritage site and a primary scene in the Harry Potter movies). My attendance to this conference gave me the opportunity to share my ongoing research with world class climate scientists. I was the only undergraduate among seasoned scientists and PhD students. The OSCAR program gave me the opportunity to move one step closer to become a part of the next generation of Arctic scientists.

Email ThisBlogThis!Share to TwitterShare to FacebookShare to Pinterest
Labels: COS, USTF
Newer Post Older Post Home
The Office of Student Scholarship, Creative Activities, and Research (OSCAR) supports undergraduate research and creative activity, both within and beyond the classroom, at George Mason University.
This blog was the website before we opened oscar.gmu.edu. Now, we use it to feature work by our undergraduate scholars, update you on scholarly events at Mason and share opportunities beyond Mason.