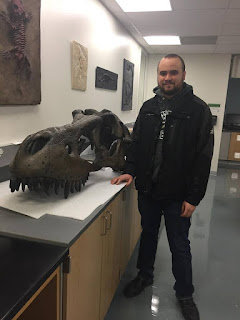 Ever since I was a child, I have had a strong interest in early crocodilians and early dinosaurs, the geologic history of the earth, and evolution. It is fitting that my project, under the guidance of both Dr. Linda Hinnov and Dr. Mark Uhen, measures the change of morphology of air-pocketed, or pneumatic bones of Theropoda and Paracrocodylomorpha and compares the change of morphology to the changing climate over the Triassic-Jurassic boundary. Theropoda are a group of dinosaurs that included large carnivorous dinosaurs (Tyrannosaurus rex) and birds. However, during the Triassic, theropods were small carnivorous organism; living in the shadow of Paracrocodylomorpha. Paracrocodylomorpha are a group of reptiles that include crocodilians and their ancestors. During the Triassic, this group was the top terrestrial predator.

My current research has guided me to develop scientific skills, such as, formulating hypotheses, designing experiments, analyzing data, interpreting data, and technical writing. This has allowed me to delve deeper into the paleontological field and acquire a greater understanding for it. My project has provided me the opportunity to develop scientific skills for conducting research before attending graduate school.

What I do varies week to week when I am working on my project. For the first couple of weeks I would search for peer-reviewed articles from the Paleobiology Database (PBDB) about the anatomy of Theropoda and Paracrocodylomorpha that I could add to my data set. I collected the presence or absence of the pneumatic bones in the vertebral column of both groups. I then collected pCO2 from the Triassic and compared it with anatomical data over time.