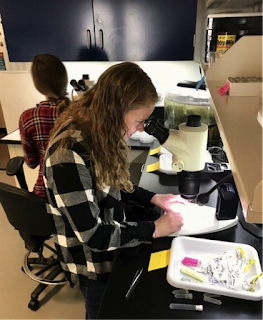 My name is Madeline Illar and I am a senior majoring in biology and minoring in math. I began working with my mentor, Dr. von Fricken, last semester for the Biology Research Semester program. I analyzed hospital records and wrote a case series report about Lyme disease presentation in Mongolia. Researching Lyme in Mongolia sparked my interest in tick-borne illnesses in Northern Virginia. Climate change is likely impacting the number of tick species present in the region, so new tick-borne illnesses may be introduced to the region. The aim of my project is to collect ticks from parks using tick drags that I built, organize them by species, stage, and sex, and then break down the ticks chemically, extract their DNA, and run Real-Time PCR using different bacterial primers to determine which diseases the ticks are carrying.  The data can be helpful in determining the density and spread of ticks and tick-borne illnesses in Northern Virginia.

So far this semester I have been doing lots of literature review to design my lab and field protocol and determine which sequences may be successful for primers. I have also worked on grant applications, so that this project may be continued for multiple seasons, so we can begin to track change over time. In a few weeks, when the weather is warm enough for ticks, I will begin collecting in parks and testing the samples in the lab.

After I graduate, I plan to go to medical school, and I believe that conducting research about human disease will be a valuable experience as I work toward my career goals. Working on this project has shown me how much scientists have learned about Lyme disease in a short period of time, and how much there is still to learn about Lyme and other tick-borne illnesses.