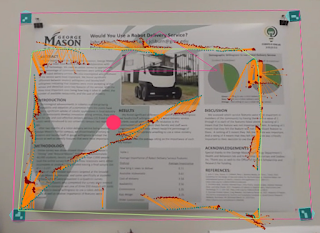 At the start of the Spring 2019 semester I began a research project investigating how different design strategies for academic posters affects what people learn from them. The idea for the project came about after a graduate student in the Health Behaviors research lab shared her research poster at one of our lab meetings. The poster was strikingly colorful and instead of relying on large paragraphs she opted for several eye-catching infographics. It sparked a debate within the lab about whether traditionally designed posters would be as effective at communicating information. Since then, I’ve been working on an experiment designed to assess how people view and learn from academic posters.
In the months since the project began, I’ve learned how to write a research proposal for an Institutional Review Board. I also learned how to properly calibrate and use an eye-tracking headset as well as how to work with the data in R. Conducting my own experiment through OSCAR’s Undergraduate Research Scholars Program has been an exciting opportunity that has given me the chance to learn about applied research. The skills that I’ve developed during the course of this project will help me further my goal of conducting psychological research professionally.
In my experience, every week since I started my research has been different. Early on there was a significant amount of planning and writing that went into developing a research proposal. Creating the materials and procedures for my experiment involved many afternoons spent working in a psychology department lab space. Over the course of the semester I’ve learned how rewarding it can be to conduct my own research especially when given the freedom to try new things and approach problems creatively.
Posted by OSCAR 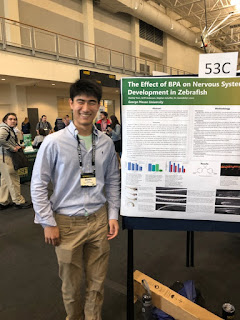 In the 2018 spring semester, I took a class called Zebrafish Lab with Dr. Gwendolyn Lewis. In this class, we were split into groups and told to choose a chemical to treat zebrafish embryos with. Out of all the available chemicals, my group and I decided on BPA. We chose this chemical because it is used in the creation of plastics, which is accumulating in the oceans, and reportedly, people. After a semester of testing, we found BPA had negative effects on heart rate, body shape, pigmentation, axon formation, and Schwann cell formation. Because I enjoyed the class so much, I asked Dr. Lewis if I could continue the project into the coming year, so she suggested I sign up for OSCAR.
In this new iteration of the experiment, I am mainly looking for differences in peripheral axon development in zebrafish embryos after treating them with BPA. A tentative schedule is as follows: On Monday, I set up breeding cages for the zebrafiStSsh. On Tuesday, I collect the embryos that settle at the bottom of the cages and then mix three different concentrations of BPA in the water of the embryos. On Wednesday, if I choose to take body shape, pigmentation, or tail coiling measures, I remove the embryos from their eggs and do any or all the above analyses. If I instead choose to image the peripheral axons, I treat the zebrafish embryos with PTU, which prevents formation of pigment cells so I can get a clearer image. On Thursday, I would report my weekly findings to Dr. Lewis. On Friday, I would take care of the fish tanks and then image the zebrafish embryos, targeting the area where the peripheral axons exit the spinal cord. So far, it seems that fish treated with higher dosages of BPA had higher rates of ectopic (growing where they shouldn’t be) axons.
Overall, the OSCAR program has been a unique and engaging experience that will translate to my current goal, which is to become involved in clinical research. One of the most exciting experiences was being able to go to the National Conferences on Undergraduate Research as part of the OSCAR program, where we had an opportunity to share our research and learn about the huge breadth of other topics being researched by other students all over the country.
Posted by OSCAR 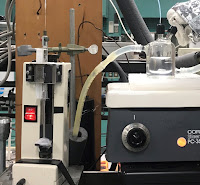 I was initially interested in doing research related to analytical chemistry, as I thoroughly enjoy calculations and the precision and accuracy required to work with small amounts of chemicals. With this in mind, I spoke to Dr. Hussam about starting research with him. He was interested in exploring the formation of silica nanoparticles – particles small enough that not even conventional microscopes can make them out. We decided to test his proven instrumental method on the formation of these particles, known as the Stöber process. This method involves running the reaction in an airtight container. An instrument known as an equilibrium headspace gas chromatographer then takes minute samples from the vapor within the cell and separates out any volatile chemicals within the sample. We could then analyze these chemicals in order to see how the concentrations change over time. From these changes, we can observe many different chemical and physical properties related to these silica nanoparticles. We were actually able to observe something quite unexpected. Several probe chemicals, known as n-alkylbenzenes, were used to help track the formation of the particles. These benzenes feature an increasing number of -CH2 groups attached to a central ring. We noticed that as the number of -CH2 groups increases, the uncertainty in the results increased and the amount of interaction between the benzenes and the silica nanoparticles decreased. We are still looking into the plausible causes for this.
While the instrumental runs are quite important, the most time is actually spent on data calculations. This allows us to find out important values such as the concentration at which the particles form, the equilibrium formed between these particles and the aqueous phase they are located in, and the kinetics for the formation of said products. Several other instruments are used to characterize the presence and size of the particles, though these runs typically only take a few hours, followed by several more hours of analyzing the data for findings.
Overall, this has been an intriguing research experience that I hope to continue to some degree in my graduate studies.

Email ThisBlogThis!Share to TwitterShare to FacebookShare to Pinterest
Labels: URSP
Newer Posts Older Posts Home
Subscribe to: Posts (Atom)
The Office of Student Scholarship, Creative Activities, and Research (OSCAR) supports undergraduate research and creative activity, both within and beyond the classroom, at George Mason University.
This blog was the website before we opened oscar.gmu.edu. Now, we use it to feature work by our undergraduate scholars, update you on scholarly events at Mason and share opportunities beyond Mason.