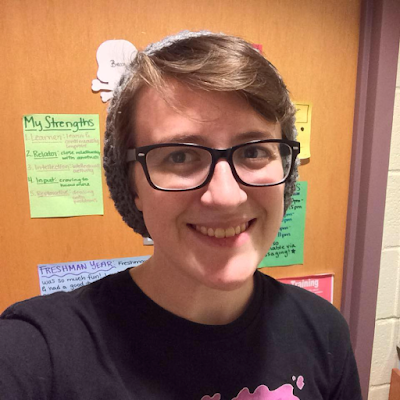 Hello! My name is Rebecca Beuschel. I’m a sophomore studying Biology and Neuroscience, working in the Grant Lab out in the Science and Technology campus in Manassas, VA. My project is a part of the Grant Lab’s IPF project: a project focused on trying to find the possible causes of idiopathic pulmonary fibrosis, a terminal interstitial lung disease. I’ve been working on the project since August 2016. My part of the project is focused on analyzing the sequences of cytochrome p450 protein genes, proteins involved in drug metabolism, in both normal lung cells and lung cells from patients with IPF. Last semester, I mainly focused on sequencing different sections of different cytochrome p450 genes, looking for possible mutations in regulatory regions. This semester, I’ve focused on looking for factors in these sections of genes that regulate the opening and closing of the chromosomal regions containing these genes.

I got interested in the project during my freshman year. Dr. Geraldine Grant, the head of the Grant Lab, was my cell biology professor during my first semester. I expressed interest in working in her lab and gaining key lab and research experience. I also was looking for an answer to a question: medicine or research? I trained during the Spring 2016 semester, got a taste of the project and the gravity of IPF, and became interested in helping the lab. Ever since, I’ve been working on this project with other members of the Grant Lab.
My long-term goals in life are to eventually teach at a university and conduct research in either immunology or in genetics. This experience of working in a lab and aiding in a research project is a necessary tool to get me to where I want to be. From the Grant Lab, I learn not only key cell biology and genetics lab techniques that I will most likely be using for the rest of my life, but I get to learn how to present information to others, via lab meetings with Dr. Grant and her advice in one-on-one meetings.

Most of my work in the lab revolves around setting up DNA samples for Polymerase Chain Reactions (PCRs), a method of amplifying a certain sequence of DNA based off leader sequences, called primers, that cover both ends of the sequence. The amplified products are used for multiple other processes: developing melting point curves, running gel electrophoreses (which are run in order to quantify the DNA product and see if the PCR was successful), separation of the two DNA strands, and Sanger sequencing of the two strands of each amplified product. The beginning of this semester revolved around ordering new primers to replace the ones that failed last semester, and converting the DNA samples with a bisulfite kit, which converts cytosines (C) not directly next to guanines (G) into thymines (T). This semester has been more complicated than last semester, as I’m working from a newer angle that has complicated the project in ways that we, the people in the lab working with me on the project, had not anticipated in the beginning of the semester. The primers that we were using had not been working well, failing to produce amplified products for analysis. I’ve learned to never underestimate the preliminary research for the different stages of a project and to make sure that everyone on the project fully understands the concepts going into the project. But, from this, I’ve also learned to adapt to new situations and to make the changes necessary to finishing the project and that it’s ok when things don’t turn out as planned.