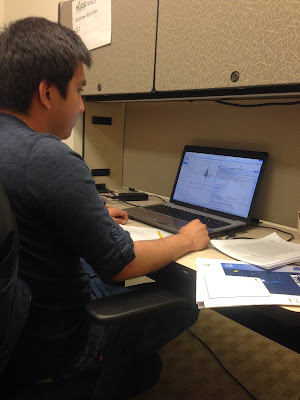 My work is a research assistant is mostly computational, as it mostly involves data analysis and modeling. I work with data taken from satellites such as MAVEN, processing it and visualizing it. Data analysis and done using the Fortran programming language, a language used for scientific computing since the 1960's. Modeling and plotting data is done using IDL (Interactive Data Language).

A typical day in research is spent reading articles on atmospheric science, and programming. My platform of choice is Ubuntu Linux, and many programmers will tell you that Linux is the platform of choice for programming. The process of installing the appropriate libraries to program in is very important for data analysis and modeling. In particular installing all the packages to access the data from the HIRDLS satellite device proved to be challenging, so I had to learn much this week about building software in a Unix environment.

My actual research involves investigating the wave characteristics of the atmosphere. Much of the research into this subject is around investigating the types of waves known as solar tides, planetary (Rossby) waves, and Kelvin waves. These are caused by larger-scale effects such as the varying proximity of the Earth to the Sun (solar tides) and the air seeking equilibrium from the Coriolis force (Rossy, Kelvin waves). What me and my mentor, Dr. Erdal Yigit, study is the small-scale gravity waves that are caused by weather fronts in the lower atmosphere and airflow over the topology of the Earth. In order to study this we use temperature, density, and pressure profiles (values at different heights) at specific latitudes and longitudes, and analyze them to produce gravity wave momentum fluxes and information about the harmonics (wave characteristics).

My long-term goals of becoming a great physicist and programmer are obviously aided by this experience. The sort of computational work I do regularly help me become a better data analyst and modeler. The research itself aids me in further understanding the dynamics of Earth’s climate as well as other planets (Mars in particular).
Posted by OSCAR