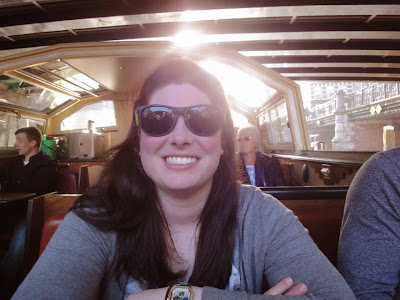 I had just starting nursing school and I heard about a potential for a work-study program that involved being a research assistant. A friend from school had recently become involved in the study, and it sounded like something I would be interested in. The project involves working with Latino mothers and their babies and investigating the causes of childhood obesity. Studies have been done in the past to examine the correlation between feeding, activity level and childhood obesity, but there has never been a focused study on this population. This is especially important because Latino people have a higher obesity rate than the total National obesity rate. I have always had an interest in working with the Latino population, having spoken Spanish since I was 6 years old. After being selected to work on the project by Dr. Gaffney, I started going to meetings with other students working on the same project. As a group we worked on getting the project off the ground.
During the first month or two a lot of time I spent 1-2 days a week shadowing the doctors and the nurses to gain an understanding of the flow of the clinic. The research assistants working under Dr. Gaffney, including myself, met weekly. In the beginning we were very focused on making sure our interview questions for the mothers, which were in Spanish, made sense. These had all been translated from a study done in English, and then back-translated to check for accuracy. We spent lots of time double checking the interview questions and making sure our questions had the intended meaning. The interview questions continued being changed even after we started conducting the interviews, and were told by the interviewees that a question did not make sense. After getting clearance to proceed with the interviews for the internal review board at George Mason and INOVA, and after completing several training modules, we were ready to begin interviews.
The study aims to look at the feeding and activity of babies who range from 2 months to 1 year. The mothers answer questions relating to the amount, frequency and type of feeding (breast, bottle, formula or other), and if the baby is being fed solid foods such as fruit or vegetables or rice cereal. I also investigate the activity level of the babies by asking about how much “tummy time” the baby gets a day and how much time is spent in different seats including car seats, swings and other restraints. To qualify for the study the mother needs to be born in non-US country, self-identify as Latina/Hispanic, and be at least 18 years old. The baby needs to be a full-term, singleton birth, and at least 5 lbs at birth. The interviews were conducted at the baby’s 2 month, 4 month and 6 month visits to the clinic.
I really enjoyed doing the interviews. I was nervous at first, but after one or two, I felt much more comfortable conducting the interviews. There were some surprises for me during the interviews. Many of the babies, even at 2 months, spent a lot of time in front of a TV. Others were being given juice, or solid foods. The study also had measures to check for post-partum depression, and if they answered the questions in a way that indicated possible depression, they were referred for further evaluation. There have been many interesting experiences during my time spent conducting the interviews. I have also conducted phone interviews for the 4 or 6 month visits if the baby’s appointment was on a day that none of the research assistants available. This has been a great experience so far and I look forward to continuing it!
Posted by OSCAR