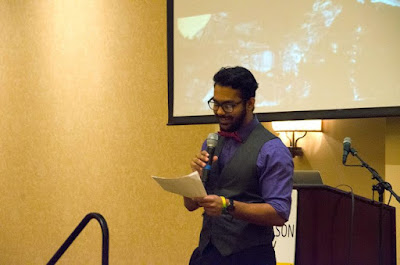 I am an undergraduate Neuroscience major, Mathematics minor, and self-identified pre-MD-PhD student at Mason. My primary research endeavor this semester was as an OSCAR Undergraduate Research Assistant for Dr. Blackwell,the Principal Investigator for the Computational and Experimental Neuroplasticity Laboratory (CENLab) at the Krasnow Institute for Advanced Study. This semester I have aided Dr. Blackwell in the process of consolidating two computational models that, individually, modeled the systems biology within Medium Spiny Projection Neurons (MSPNs); while one model focused mainly on pathways following from a specific type of G-protein coupled dopamine receptor, and the other model focused mainly on pathways connected to a specific type of G-protein coupled glutamate receptor, the combined model will include major molecular species and pathways from both the aforementioned G-protein coupled dopamine receptors and G-protein coupled glutamate receptors.

My weekly activities in the lab generally build from progress completed in the week prior. However, I start my day at the lab by logging into the Linux computers (specifically, they are running a version of Red Hat's Fedora OS), 'pulling' (essentially syncing) the project's git repository (git is a service that can be likened to Dropbox or Google Drive), loading up my task objectives on emacs (a customizable Linux text editor), and flipping through my lab notepad for any information I need to continue my objectives. In the earlier phases of my assistantship with Dr. Blackwell, I had to learn, from online Linux tutorials, how Linux OS differs from Windows OS and how to utilize the terminal to accomplish tasks. I then had to read through past publications and map out the pathways from each of the previous models (as partially shown in the embedded picture). I was then tasked with parsing through the reaction xml files used in the model, and evaluating them for the principal of microscopic reversibility, a particular principal in chemical kinetics. In this process, I was also able to add a few reactions to the model myself!

My most recent progress with the project has been in regards to totaling the concentrations of molecular species used in the model in order to provide information for comparison with values from literature. My most recent discovery had actually been an accident in terms of my use of the LibreOffice Calc (Fedora's native equivalent program to Microsoft Excel) spreadsheet to total species: I had used incorrect volumes for the different regions of the MSPN in the model; I will need to correct the volume numbers according to the model, and establish a correct total concentration of species within the model MSPN. After this is completed, I am excited to begin simulation of the reactions in the neuron, with the goal in mind of establishing proper values for the initial conditions of the system!
Posted by OSCAR