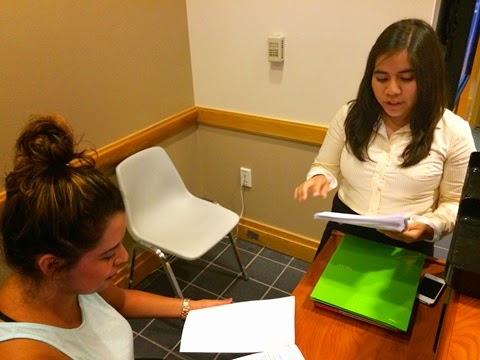 Never would I have though that I would be conducting research on something of that would be of so much interest and significance to me.  With OSCAR funding, I am researching the relationship of cultural simpatía and workplace favoritism. Simpatía is the act of behaving with dignity, respect, courtesy and empathy toward others with the goal of emphasizing positive behaviors and deemphasizing negative behavior. Simpatía is a deeply held value in many Latin American cultures and in this study, my mentor, Dr. Olivia (Mandy) O’Neill and I are investigating whether the cultural value of simpatía is associated with a perception of less favoritism in the workplace.


To test this phenomenon, we created a multi-step survey in English and Spanish to determine whether the language of the survey and personality factors illicit different responses in our subjects. This past week, my main focus has been to find participants, in particular Spanish-speakers, to take survey.  In order for the data to be representative of the population, I have to find as many people as I can to take it. There have been some days of frustration where only two to three people take the survey in a day.  But there are also very rewarding days were 15+ people take the survey. Thus far, gathering data has been the most challenging part of my study, but my findings in the analysis stage should make it all worth it.
I have come to learn it is often difficult to study human subjects.  We all are different in so many ways yet there are some aspects that we share. By doing this study, I now see research like a maze; there are various routes available, but you can only pick one.  However, if the route you choose does not lead to an outcome, it is a matter of turning around and getting on a different route to find something interesting to share. Comes to show that once curiosity enters the mind, not matter how difficult the task may be, a researcher is determined to find an answer.

Email ThisBlogThis!Share to TwitterShare to FacebookShare to Pinterest
Labels: SOB, URSP
Newer Post Older Post Home
The Office of Student Scholarship, Creative Activities, and Research (OSCAR) supports undergraduate research and creative activity, both within and beyond the classroom, at George Mason University.
This blog was the website before we opened oscar.gmu.edu. Now, we use it to feature work by our undergraduate scholars, update you on scholarly events at Mason and share opportunities beyond Mason.