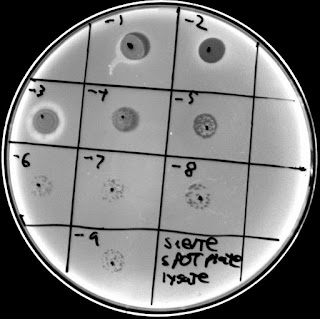 My name is John Perkins, and I am a Senior here at George Mason, finishing my second-to-last semester this Fall. In the Spring, I will be graduating with a BS in Biology with a concentration in Bioinformatics and a minor in Computational and Data Sciences. My OSCAR URSP project involves further understanding bacteriophages that we discovered in BIOL-401 in the Fall of 2018. Bacteriophages are viruses that exclusively infect bacteria, and even though there are an enormous number of them, they have been relatively understudied. I isolated one of these phages myself from a soil sample I had taken, purified it, and extracted its DNA. After its genome was sequenced, we found the genes in the DNA and tried to figure out what they each did. This “annotation” used several different types of computer techniques, so while we could make strong and supported hypotheses, there was an opportunity to confirm them by studying the phages experimentally and seeing if our annotations were correct. One of the things that interested me the most was an idiosyncratic feature of one type of phage gene.

During our annotation, I had developed a bioinformatic method that helped identify the likely site of an ORF shift within the Tail Assembly Chaperone (TAC) gene. These genes frequently contain an unusual feature called a Programmed Translational Frameshift (PTF) that makes them difficult to annotate. Using the python script, I wrote, we were able to determine where we thought the PTF was in the TAC gene. For my URSP project, I wanted to characterize the gene expression proteomic ally using a technique called Tandem Mass Spectrometry. This would confirm whether or not we made the right calls in our annotations, as well as in our TAC gene. This project interested me because of the combination of hands-on work in a lab as well as computational analysis. OSCAR also gave me a chance to continue the work I had started in the phage classes last year. I have a very real sense of ownership over this project; I discovered the phage, I wrote the software, and I did the work to further the annotation. Having a project like this under my belt will help me stand out in the future.