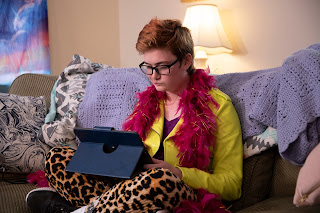 As a queer storyteller, I feel it is important to represent queer people in media, including children’s media. I had an idea for a children’s web series in my in my back pocket for two years, so when I decided I was in a position to produce it, I brought it to OSCAR. In my web series, I specifically set out to present kids with characters who were not cisgender, because at that time, children’s content exclusively featured cisgender characters. I knew from personal experience that gender is not an ‘adult’ topic, even young children think about gender. My two closest friends are not cisgender and they both work with children professionally. Their students have little to no issue using correct pronouns and accepting their gender identities. First, I needed to determine which age group would find this representation relevant, appropriate, and meaningful. Through my research, I found that the ideal age range is three to six years old. Thus, 25 Dandelion Drive, a web series for a preschool audience, began preproduction.

On this web series I served as writer, producer, and director. This production fits into my career goals because I would like to eventually work as a television writer. I have always enjoyed writing children’s content, so that is one genre I am considering pursuing. I will be able to use this series to demonstrate to production companies, potential employers, that I am a conscientious and capable writer and producer. The skills I have sharpened as a producer are relevant to may positions I could pursue in film development.

On a weekly basis, I meet with my mentor professor and check in with different members of my crew. Beyond that, the tasks vary from week to week. In the beginning of the semester, I was writing the episodes. Now at the end of the semester, I’m organizing receipts, making sure everyone gets reimbursed, and giving directors notes to my animators.

This term I discovered some of my strengths and weaknesses as a producer and as a director. For example, I’m good at coordinating and organizing people, but I need improvement in articulating my artistic vision to my director of photography. In general, this project gave me an opportunity to improve my skills as a filmmaker.
Posted by OSCAR