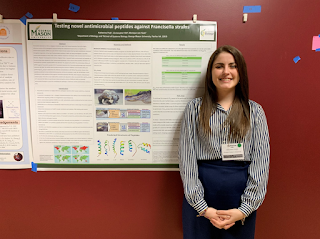 I recently attended the Mid-Atlantic Undergraduate Research Conference at the Edward Via College of Osteopathic Medicine in Blacksburg, VA. This weekend was a really fun time to network with other students and research professionals. While at the conference I was able to present some of the research I have been doing this semester with the van Hoek lab on the SciTech campus.
The van Hoek lab focuses on Francisella tularensis, a bacterium classified as a Tier I, category A bio-threat. Due to the highly infectious nature of this bacteria, it is super important to understand it and how to treat it. I first became interested in this work when I came to Mason as a freshmen and heard about “the lab looking for new antibiotics in Komodo dragons.” Turns out that lab was Dr. van Hoek’s and now I have the privilege of working with her.
My project focuses on studying antimicrobial peptides against strains of Francisella. An antimicrobial peptide (AMP) is a molecule produced by the innate immune system that targets bacterial cells infecting the host. What’s super cool about AMPs is that they have been conserved throughout evolution, this means humans have them, birds, reptiles, other mammals, you name it, we all have AMPs. In the last 100 years we have seen multiple bacteria to develop resistance to antibiotics, but in the millions of years of evolution bacteria have not evolved to evade AMPs. Therefore, we are studying AMPs as a potential new source of antibiotic treatments. My project specifically studies peptides isolated from Komodo dragon, American Alligator, and Chinese Cobra against different strains of Francisella to see if these peptides have antimicrobial activity against Francisella. I am also developing a novel procedure to study these peptides against Francisella tularensis NIH B38, which requires special media to grow.
My project is fairly new and we do not have enough data to make conclusions yet. However, I have really enjoyed my research with the van Hoek lab so far, and I am so glad I had the chance to share my research with the Mid-Atlantic Undergraduate Research Conference.