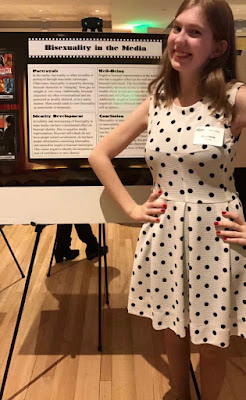 My name is Clare Yordy, and I am a freshman studying Government and International Politics. I am conducting research on how bisexuality is portrayed in film and television, which I began working on in my Honors 110 class last semester. I’ve always had a passion to learn more about sexuality and gender, so I thought it would be interesting to look into a sexuality that gets very little positive attention: bisexuality. Because bisexuality rarely appears in any form of mass media, I wanted to find out how it’s represented and how it affects society as a whole. After completing the class, I realized how much work there was to do on this topic, and was inspired to pursue it further. Eventually, I came to realize that I will also want to research how portrayals of bisexuality affect bisexual individuals and societal views of bisexuality. However, for the sake of time this semester, I am only focusing on mediated portrayals of bisexuality.

On a weekly basis I watch movies and television from 2000 to the present that contain bisexual characters. I have a running list of shows and movies to watch and take careful notes on what the characters are saying, what other characters are saying abo
ut them, and their actions. I then take these notes and try to find common themes and patterns among these characters. These notes will be used to perform a rhetorical analysis on my chosen characters.

Email ThisBlogThis!Share to TwitterShare to FacebookShare to Pinterest
Labels: CVPA, URSP
Newer Post Older Post Home
The Office of Student Scholarship, Creative Activities, and Research (OSCAR) supports undergraduate research and creative activity, both within and beyond the classroom, at George Mason University.
This blog was the website before we opened oscar.gmu.edu. Now, we use it to feature work by our undergraduate scholars, update you on scholarly events at Mason and share opportunities beyond Mason.