I am writing a program that will make it easier for composers to use non-Western or completely new invented scales in their compositions.  This is based mainly on the process of approximating logarithmic functions using continued fractions, or, more specifically, the convergents of the continued fractions.  This summer was spent mostly coming up with various algorithms as I balanced working on my project and my other responsibilities.
I happened upon my topic while I was researching a relatively routine project.  I was to create a musical piece in the style of Wendy Carlos’s Switched on Bach, an album that changed how electronic music was received by mainstream audiences.  However, while reading through Carlos’s essays, it became apparent that she had done much more research into alternative tunings after Switched on Bach.  In fact, one particular article, “Tuning at the Crossroads,” changed what had begun as a regular project into a passion that would take years to realize. 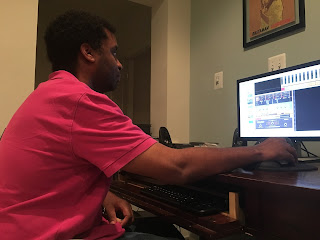 My research into microtonality and non-Western tunings inspires me not only when I am discovering music but as I compose as well.  There are many sounds, textures, and musical ideas that are not easily realized in Western music, and my research is aimed at tackling this compositional difficulty.  The thing that makes the research interesting is the fractal nature of it; it seems that the more I dig into a topic, the more complex it gets.  That can be frustrating at times when I am trying to reach a goal; falling down a researcher’s rabbit hole is not helpful.  However, more often than not, the twists and new information is fascinating.
Posted by OSCAR