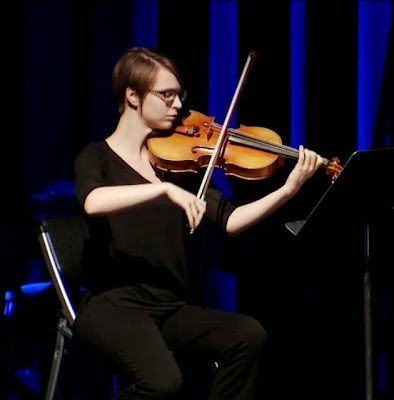 My initial interest in this project came from my own studies as a violist. We all strive to play our instruments in tune, but when are we truly in tune according to the music we play? The equal temperament system widely used on pianos divides the octave into twelve equal parts (half steps), while systems like the one used in J.S. Bach's Well-Tempered Clavier are based on tuning specific intervals to sound consonant. We string players have the advantage of simply moving our fingers to adjust pitch to reach a desired tuning, allowing us to make an F-sharp lean in towards a G or a B-flat to fall into an A, thus strengthening a note as part of a tonal center. Once we stretch into atonality (music without a tonal center), the adjustments made from equal temperament may disrupt the overall philosophy of the music. Atonal music involves using all twelve notes equally with the absence of a tonal center, so all of a sudden the natural tendency to lean an F-sharp into a G could disrupt the intent of an entire piece.

This past week, I realized that atonality is a very complex musical philosophy that may have more behind it than I originally thought; the strict rules seem to only serve as definitions for the sake of textbooks. Arnold Schoenberg, the leading composer of atonal music in the 20th century, wrote an entire book on traditional, tonal harmonies. Now I am left to wonder (and eventually hope to discover) whether these composers would have fussed over a slightly higher F-sharp, or welcome a performer's interpretation of each pitch value.

Aside from hiding in a practice room with my instrument or designing the experiment, I spend a lot of time teaching and working with young strings students. After orchestra rehearsals and classes are over, I travel to students’ homes or to local schools to teach. I also work as the orchestra librarian for the Piedmont Symphony. My life is revolves almost completely around music, and sometimes I feel like I have no free time to do other things… But then I wonder, why would I ever want to do something else?
Posted by OSCAR

Email ThisBlogThis!Share to TwitterShare to FacebookShare to Pinterest
Labels: CVPA, URSP
Newer Post Older Post Home
The Office of Student Scholarship, Creative Activities, and Research (OSCAR) supports undergraduate research and creative activity, both within and beyond the classroom, at George Mason University.
This blog was the website before we opened oscar.gmu.edu. Now, we use it to feature work by our undergraduate scholars, update you on scholarly events at Mason and share opportunities beyond Mason.