The Alliance for Zero Extinction (AZE) identifies the world’s most vulnerable species. These species are considered endangered or critically endangered and only have one remaining population in one location. These locations are known as AZE sites, a designation which allows them to be prioritized for conservation efforts. AZE species are all considered endangered or critically endangered. However, threatened species can also be listed as near threatened, vulnerable, or extinct in the wild by the International Union for Conservation of Nature (IUCN).

For my URSP project, I am working with Dr. Luther and the Biology Department using Geographic Information Systems to compare a global map of AZE sites with global data on all categories of threatened species. We will analyze the data to determine how many other non-AZE threatened species exist at each site, what percentage of threatened species are and are not covered by AZE sites, and how many are already in protected areas, along with other breakdowns. Since AZE sites already receive special conservation attention, we are hoping to demonstrate that by protecting these sites, other threatened species would also be protected. This project is very timely as this year the global Convention on Biological Diversity is expected to adopt a Post-2020 Biodiversity Framework in its efforts to work towards the 2030 Sustainable Development Goals. As decisions are made for the future of conservation, it is important that world leaders have all the information necessary to do what is best for our planet and its species. 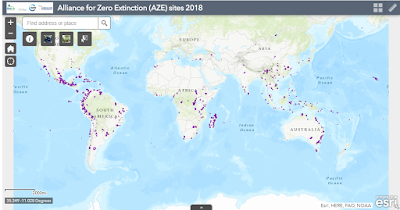