Idiopathic Pulmonary Fibrosis is an interstitial lung disease that affects the interstitium of the lung. This area becomes stiff through the increased collagen production of fibroblasts excreting an excessive amount of the protein, collagen 1A1. Throughout the summer semester I have created cell lines from patients who donated their lung tissue. The cell lines consist of fibroblasts from normal lung tissue and IPF lung tissue. This requires regular care and monitoring of the cells. While the cell lines are growing to a confluency that can be used to treat with the nano particles, I work on optimizing and creating the nano particles. The nano particles are made from lipids and encapsulate the anti-fibrotic drug Nintedanib. This drug is a current FDA approved market drug that is only one of two current drugs used to treat IPF. 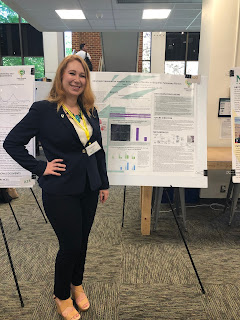 Throughout the summer I have made many batches of nanoparticles and have been testing their efficiencies in varies capacities. This includes the use of PCR, Western Blot, LC-MS, and dynamic light scattering. The dynamic light scattering showed the creation of a good liposome within the size range I was looking for. I plan on continuing my research into the fall and ultimately using the techniques I’ve learned as an undergrad in a graduate program or medical school.
Posted by OSCAR

Email ThisBlogThis!Share to TwitterShare to FacebookShare to Pinterest
Labels: STIP
Newer Post Older Post Home
The Office of Student Scholarship, Creative Activities, and Research (OSCAR) supports undergraduate research and creative activity, both within and beyond the classroom, at George Mason University.
This blog was the website before we opened oscar.gmu.edu. Now, we use it to feature work by our undergraduate scholars, update you on scholarly events at Mason and share opportunities beyond Mason.