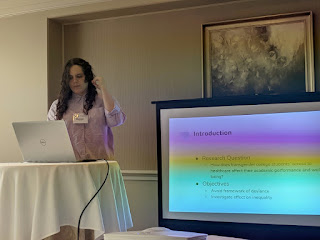 I attended the annual meeting of the Southern Sociological Society from April 10th to 13th, 2019, where I delivered a presentation titled “Healthcare Access and Academic Success Among Transgender College Students.” This presentation concerned research I performed as an undergraduate capstone project. I collected primary survey data from transgender students at colleges and universities to examine whether their academic performance was correlated with their healthcare access. This research is important for several reasons. Existing research is sparse, but broadly suggests poor mental health outcomes and negative experiences in academic spaces among transgender students. These issues are exacerbated by a lack of knowledge about transgender people among medical practitioner.

My research employed an online survey method to collect information about the healthcare experiences of transgender students as well as their self-reported sense of academic well-being, grade point average, whether they had failed classes, and whether they expected to graduate on time. Results indicated a possible correlation between medical treatment and having failed classes. However, those who were not given proper medical treatment reported greater well-being than those who were. I speculated that trans people who did not receive appropriate treatment may, in some contexts, be able to avoid discrimination if others are not aware that they are transgender.

At the meeting of the Southern Sociological Society, I presented at one of the first sessions of the conference. My presentation was a success, with about a dozen people came to one of the first paper sessions of the conference. I also had the opportunity to attend several other paper sessions, including some with similar topics to my own, where I was exposed to new ideas and met new people. I also volunteered at the conference’s registration desk for several hours, during which time I was able to meet some of the conference’s organizers and many attendees. Overall, the conference provided me an opportunity to develop my presentation skills, network with others in my field and gain a glimpse into the kind of work I may find myself doing in graduate school.