Writing a Musical about George Mason, our Founding Father 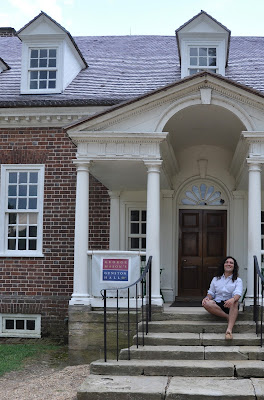 As I’m finishing up my undergraduate degrees here at GMU, I jumped at the opportunity to make my cool idea a reality. I’m a senior in the Physics and English departments, but have always had a passion for theatre and music. While my fields of study seldom nurtured that passion, I maintained its flame with what time I could outside of class, performing with local theatre companies and playing with local bands & ensembles. After hearing about OSCAR’s summer research opportunities for undergrads, I took a chance to feed my creative passions on campus for a change, and wrote my proposal for a grant to write George Mason, the Musical. One month later, I got the good news, and my cool idea wasn’t just a cool idea anymore. Excited and daunted, the reality of the enormous endeavor before me was setting in when I realized: I have a lot of learning to do.


The real challenge, however, is the research process. Meetings with my faculty mentor, Dr. Rosemarie Zagarri, regularly point me in the right direction and kept my work on course. I am new to history, academically speaking, so writing a show about the real life story of our university’s namesake has taken me places I’d never gone before. After my initial reading about the life and times of Colonel George Mason IV, I found myself spending most of my days at Gunston Hall, Mason’s ancestral home in Lorton, Virginia, walking the grounds and making myself at home in their research library. The librarians, scholars, and educators there have become fast friends and invaluable resources, answering my constant questions and lingering curiosities. Sometimes I’ll spend an entire day or more doing what I thought would only take a few hours, but, as my new friends at Gunston have frequently reminded me, history always takes more time than you think. But with determination and maybe another listen through the Hamilton soundtrack—if you haven’t guessed, I’m a big fan—I kept at it and learned so much so quickly visiting Gunston and other sites in Mason’s story, like Washington’s Mount Vernon, Colonial Williamsburg, and Independence Hall in Philadelphia—all their respective scholars seem to to know each other, by the way, so making introductions has been easy!

After months buried in books, skimming through archived materials, and deciphering the 18th Century scrawl of Colonial handwriting, the arc of George’s story became discernable, and the words of my script were manifesting in the margins: it was time to start writing.

Sometimes writing is sudden and instantaneous, with ideas and lyrics popping out of thin air. Sometimes writing is analytical and tedious, spending hours pouring over the text of a two-hundred-year old letter or speech, trying to find that perfect rhyme or fit the lyrics to the beat, all the while sweating over whether or not your thematic riffing retains the meaning of the piece. Every moment in the story has to mean something. Every song has to be an opportunity for a character to grow. But even though the devil’s in the details, remembering that you’re still learning makes every draft digestible. What’s more, you start to see these historical statuettes take life on the page like real people, with struggles and dreams and disappointments and victories. Mason’s got an attitude, and fights for what he believes; he’s not much one for politics, but will do anything for his children. Washington has a deep desire to be validated, to steward the new nation while protecting his reputation, but like Mason sometimes feels like he’s can’t do what people ask of him. Madison’s soft-spoken and cerebral, shy, while Jefferson is lanky, witty, dilettantish and pie-in-the-sky, and their repartee makes heady concepts much more fun to write. Suddenly, history is personal and intimate; when I write their songs, I have to feel what they feel.


The songs are still being written and the play is taking shape, but there is still much work yet to do. In the coming weeks, I’ll soon be making recordings for each musical number, to get the sound of the show together, and calling on actors and players to see how the scenes and songs sound for real. Whatever the future holds for George Mason, the Musical, I am deeply, profoundly thankful for the opportunity OSCAR has given me to take my passion seriously, working on it full-time. Whatever future work I may pursue, I have no doubt the things I learned in my research this summer will sing their way into everything I do.
Posted by OSCAR

Email ThisBlogThis!Share to TwitterShare to FacebookShare to Pinterest
Labels: CHSS, COS, URSP
Newer Post Older Post Home
The Office of Student Scholarship, Creative Activities, and Research (OSCAR) supports undergraduate research and creative activity, both within and beyond the classroom, at George Mason University.
This blog was the website before we opened oscar.gmu.edu. Now, we use it to feature work by our undergraduate scholars, update you on scholarly events at Mason and share opportunities beyond Mason.